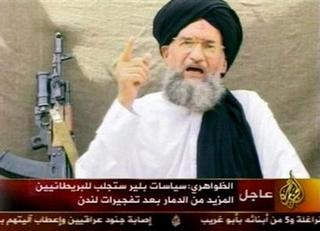 Ayman al-Zawahiri, has been captured and jailed in Tehran, a leading Iranian newspaper reported yesterday.

Zawahiri, the founder of the Egyptian Islamic Jihad, was arrested several days ago and has been imprisoned in the city's Evin jail, where political prisoners are usually held, the Hayat-e-Nou newspaper said.

The paper is regarded as reliable and is run by Hadi Khamenei, a leading legislator and the brother of Iran's supreme leader, Ayatollah Ali Khamenei.

In case you weren't paying attention...

Members of the Moroccan terror group Salafi Jihadi fought for the CIA in Afghanistan, Chechnya, Dagestan, Bosnia and Kosovo

Zacarias Moussaoui fought for the CIA in Chechnya

Khalid Sheikh Mohammed fought for the CIA in Afghanistan

Sheik Omar Abdel Rahman fought for the CIA in Afghanistan

His brother Zaiman al-Zawahiri fought for the CIA in Kosovo

Abdullah Azzam, "one of the ideological founders of Hamas" fought for the CIA in Afghanistan

Who is Dr. Ayman al-Zawahiri, whose brother Zaiman is running terrorist camps under NATO protection in the U.S. zone in Kosovo?

As the London Guardian wrote recently:

"Even to say he is bin Laden's right-hand man may understate his importance."

He is considered by many to be the real head of what is known as the bin Laden group.

"Some analysts believe that in his current role in Afghanistan, al-Zawahiri has taken over control of much of bin Laden's terrorist finances, operations, plans, and resources," wrote the Guardian.

Strangely enough, according to January 2000 U.S. Congressional testimony, al-Zawahiri was granted U.S. residence by the Immigration and Naturalization Service - something almost impossible for many legitimate immigrants to obtain.

Should we be surprised that one of the centers of operation for al-Zawahiri was London, where one of his closest relatives resided? President Mubarak is believed to have referred to him when, after the Luxor massacre, he stated: "There are people who carried out crimes and who were sentenced [in Egypt] and live on British soil."
Publicada por Diogo à(s) 22:44